cyds of concrete to date

AEI is supporting Louisville MSD’s Consent Decree program by providing the geotechnical field exploration and construction observation for a 20-million-gallon, 449-FT x 207-FT x 49-FT underground CSO basin beneath Shawnee Park in Louisville, Kentucky. During wet weather events, untreated wastewater and stormwater are captured by conveyance pipes and stored in the basin rather than flowing into the Ohio River. When the rain subsides, and system capacity is available, the mixture of wastewater and stormwater will be pumped back into the sewer system. At that point, the water is conveyed to a water quality treatment center, treated, and returned to the Ohio River. When completed, the project will be largely invisible to the public and will enhance not only the water quality of the Ohio River, but also the quality of one of Louisville’s premiere parks.

The structure, including a wet well, pump station, operations building, and three CSO diversion structures, were designed on a mat foundation with columns supporting the roof slab. Auger-cast piles were utilized to resist uplift forces. Steel sheet pile walls with tie-back anchors on multiple levels were utilized to provide both temporary and permanent excavation support. Cast in place concrete walls formed the sidewalls of the structure and the annular space between the sheet pile walls and sidewalls were backfilled with sand from the basin excavation.

AEI's geotechnical field exploration consisted of seven soil test borings, two with rock core extending 30 feet into bedrock each. Each of the soil test borings were drilled to the depth of auger refusal or to a predetermined boring termination depth. In addition, two piezometers were installed to depths of 65 feet. Laboratory testing consisted of unconfined compressive strength testing, gran-size analyses, and hydraulic conductivity testing.

Several geotechnical analyses were performed for this project. A seepage analysis was performed to determine the minimum depth necessary to prevent groundwater infiltration through the subgrade into the basin. For the portion of the wall below the sheet pile wall, the lateral earth pressure imparted by the soil between the walls was calculated utilizing the theory proposed by Spangler and Handy for fascia walls adjacent to a stable rock face. The lateral pressure on the fascia wall is a function of the weight of the soil between the walls and the coefficient of friction between the soil and two walls. For the sheet pile wall a Rankine earth pressure analysis was performed assuming active conditions. For the basin and pump station walls “at rest” conditions were assumed since those walls were not free to rotate due to the restraint at the top of the wall. Bearing capacity values were derived for the sands beneath the basin and the near surface material for the various structures. Buoyancy forces were calculated for the basin assuming it was completely submerged and void of water.

Various submittals were presented to AEI for review during and subsequent to construction. Sheet pile wall designs were submitted and reviewed by AEI and other members of the design team. When found inadequate, additional support was added to account for discrepancies. Other submittals include modifications to the backfill between the sheeting and basin wall, compaction methods (flushing and jetting vs vibratory compaction), modification to the bearing capacity at the pipe support, auger cast pile installation, updating proctor and classification data, as well as other submittals.

During construction, sand washed through the sheet pile walls creating voids outside of the walls. AEI returned to the site and drilled borings near the wet well, pump station and operations building to determine the extent and location of voids located beneath the structures. Significant void space was encountered and the design team elected to fill the voids with grout. AEI performed several additional borings grouting the borings using a tremie method to fill the void space with grout.

KY Lock 80% of Commercial tows from a 20 state area 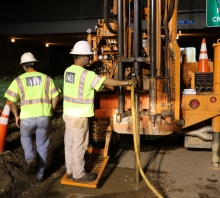