AEI completed Phase I alignment studies for the reconstruction of the KY 56 (Sebree) interchange with the Edward T. Breathitt Parkway (ETBP) in Webster Co. The project improved the ETBP/KY 56 Interchange to comply with current Interstate standards as part of the I-69 corridor. The Interchange served significant industrial traffic including coal trucks and tankers carrying molten aluminum. The existing interchange was a tolling facility with loop ramps not meeting standards for accel/decel tapers, sight distance, and turning radii.

AEI provided alternates that meet current Interstate standards. AEI also provided alternates that would leave the KY 56 bridge structure over the Breathitt Parkway in place and to avoid a steep rock cut in the southwest quadrant. The project was constrained by existing electric transmission towers just to the east of the existing ramps, a gas transmission line in the southeast quadrant and an existing frontage road in the northeast quadrant. AEI developed five (5) alternates to present to the KYTC design team for consideration. These included:

In addition to plans, profiles and critical sections, AEI provided cost estimates for each of the alternates. The alternates were presented to the KYTC Design Team, evaluated and discussed. The Project Team agreed the Full Diamond alternate provided the best option. As initially proposed, the ramp in the Southwest Quadrant (Ramp 1) had tight radius to minimize excavation in the rock cut in this area. The Project Team discussed the possibility of straightening the ramp alignment to improve safety for heavily loaded trucks. Following discussions with the Geotechnical and Utilities members of the Project Team, it was decided to move forward with the Full Diamond Interchange, including a straightened Ramp 1. 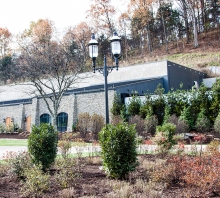 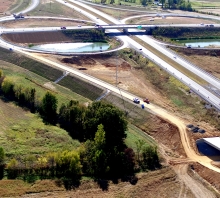